During our 20-year history, 826 Valencia has counted on thousands of dedicated volunteers to support more than tens of thousands of students. 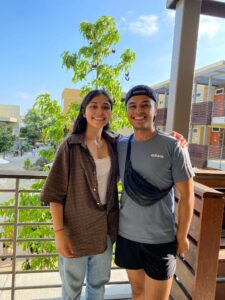 Sofia, a current college student at Pitzer, attended After-School Tutoring starting in 2011, was in our Youth Leadership Advisory Board, and served as a tutor. Her older brother, Osvaldo, a current FinTech Payments Adviser at Silicon Valley Bank, has been with us since 2007 and has participated in After-School Tutoring, personal statement workshops, the Youth Leadership Advisory Board, worked as an intern, and also supported our programs as a tutor. In addition, Osvaldo currently serves on both our Alumni Board and Board of Directors.

In a recent conversation, both siblings shared the importance of perseverance, self-assurance, and community. They also recognized those who motivated, guided, and believed in them on their journeys through 826 Valencia, including themselves. Looking back and looking forward, Osvaldo and Sofia share how 826 Valencia has impacted their lives, and their hopes for 826 in the future.

When asked about her favorite memory at 826 Valencia, Sofia shares that it was “the excitement I would feel every time I would go to the writing table and the help and recognition that I would get as a younger kid for my writing” as well as being able to turn any idea into a story or poem that would later get published. To her, that was the most fun: the read-alouds and student book signings because, as she describes, “it made me feel like some sort of famous author which encouraged me to want to keep writing more.”

For Osvaldo, that favorite memory is the 826 Valencia community, our book-filled, pirate-themed Mission Center Writing Lab and store, and the fun he had while there. He recalls going into the reading tent, hanging out at the fish theater, hearing Captain Blue (our resident pirate and editor) scream from the attic, and describes 826 Valencia as a comfortable space that “helps [students] feel at home.”

Sofia and Osvaldo chose to be a part of 826 Valencia for the majority of our 20-year history (15 years for Osvaldo and 8 years for Sofia) because of the encouragement and individualized support they received from volunteer tutors and the feeling of belonging to a community.

These years of collaboration with, and support from, volunteer tutors helped Sofia and Osvaldo build their confidence and prepared them to take what “start out as simple ideas on a piece of paper” and transform them into something different, something impactful.

Sofia notes how her time with tutors helped her with the analytical writing required in high school and during the college application process. “It made me a lot more confident in my own writing” she says, especially “those adults looking over your story and telling you where you can improve, what they really liked, I think it really made me a much more confident writer.” She adds that a few of her current creative writing classes cause her to “sort of revert back to that younger self who would get super excited about writing.” She also makes storytelling videos about important topics like activism and social justice and this process, from ideation to upload, reminds her of her time in After School Tutoring.

Similarly, tutor guidance and writing practice helped Osvaldo push himself to improve his reading, writing, and English. As a student, he was labeled an English Language Learner and found school to be a challenge, but now takes pride in his ability to communicate professionally, directly, and concisely. He shares that “it took a whole village to help me get where I am today” and he appreciates “826 Valencia, the staff, our parents and teachers” as “they’ve all played such a significant role in order [for him] to develop and grow.” He adds that thanks to the support he received he reached a milestone of feeling more confident as a writer during freshman year of high school, and then challenged himself further by enrolling in honors American literature “to the point where [he] started to take writing courses for fun in high school,” to the point when “things really blossomed into a very happy path.”

Thanks to 826 Valencia, Osvaldo developed an appreciation for literature, learned how to explore “different worlds or new, diverse worlds,” “run wild with [his] imagination,” and how to think of himself as a creative writer.

For Sofia, the Youth Leadership Advisory Board “has definitely left the impact of believing that my voice and my work matters” in addition to teaching her “how to be a better leader” and how to work with younger students.

When asked what advice they would share with current 826 Valencia students, both brother and sister unhesitatingly responded with “don’t give up.”

Sofia suggests that by persevering and exploring topics of interest, students will create community and reach their goals, like going to college, something that she “merely dreamt of going to when [she] was younger.”

Osvaldo empathizes with school being a challenge for some students, especially those that may be shy or introverted as he was, but acknowledges and emphasizes that “There’s help. There are resources like 826 Valencia that focus and specialize in this area. So ask for help.” In the approximately 15 years he’s been involved, “[he’s] been able to start from ground zero, learn, adapt, and reach where [he] is today,” and proudly so.

Today, both Sofia and Osvaldo look through an imaginary telescope, 20 years from now, to write an 826 headline for us, a dispatch from the future.

Sofia’s: “826 Valencia students have made groundbreaking advances in many fields”

So, it seems, 826 Valencia’s future, as Osvaldo previously shared with respect to himself and his sister, will “[take] a whole village,” one made up of tutors, donors, our communities, one made up of you.

Thank you Sofia, Osvaldo, and the Marquez family for being a part of the 826 Valencia family! As we Write the Future and look ahead to the next 20 years of our work, we are grateful for those who we have been lucky to grow alongside with, like Sofia, Osvaldo, our community of support, and all the incredible volunteers who have inspired us along the way.