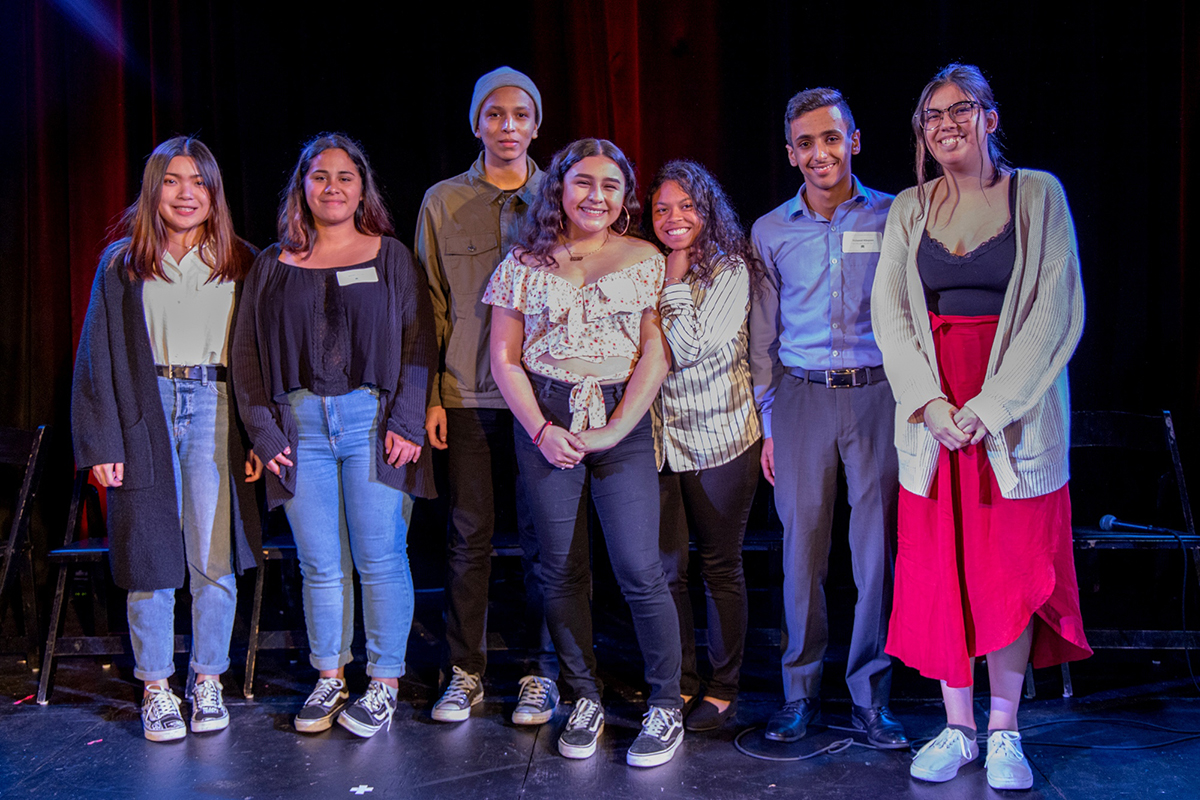 We are proud of each and every one of our students every year, but once in a while we get to honor a select few in a very special way — with our yearly scholarships. This year, we are excited to introduce you to the seven students, who have come from schools across the city and countries across the world, that have been awarded these scholarships. We are so excited to see how they continue to shine in college, and offer our resounding and endless congratulations!

Mohamed’s first experience with writing was at his elementary school in Yemen, when his teacher took an interest in his stories and invited the school principal to read them. He says, “At the time, this was roughly equivalent to winning the lottery for me. I was ecstatic, and my excitement about writing grew tenfold.” Mohamed’s enthusiasm for writing and for learning has only continued to grow from there. Having fled his hometown of Sana’a because of civil war, Mohamed came to the United States and San Francisco International High School, where he learned English and developed an interest in his newest language: coding. Mohamed’s focus on exploring engineering and computer science is unwavering; he has already taken courses at City College and had an internship in the field. Mohamed writes, “My specific goal is to use coding to create technology that will enable others to learn languages, and I would especially love to benefit youth in Yemen who haven’t been afforded the opportunities I have.” Jessica was born in Venezuela and raised in China. Facing a lack of opportunities, her citizenship status in China, and not feeling at home in Venezuela, she moved to the United States with her sister to fight for their future. She “fought the loneliness and carelessness [she had experienced]by living here without [her] parents.” Jessica is self-sufficient and works after school to earn money and pay for her own expenses and rent. Since she has multiple language backgrounds, Jessica joined many organizations to make improvements in English and gain self-confidence to communicate with others. Through Mission High School, she joined Oasis for Girls, Chinese Club, and the Newcomer Club to expand her culture in the United States. She later became the leader of the Newcomer Club to address the problems that new immigrant students face, and created events for them to connect with the community. She thinks that education can change one’s life, and is willing to study hard to change herself and repay the communities that helped her to get where she is today. Melissa’s drive to succeed comes from the example her father set for her, working seven days a week to support their family. Growing up, she worked alongside him. She remembers, “Every time I helped him, I was reminded that being successful requires backbreaking work and unflinching determination.” This tenacity and drive has helped her in school, at her job working with bilingual students at the local recreation center, and in her creative endeavors. After losing her mother when she was six years old, Melissa turned to writing to express her thoughts and feelings. She wrote poems and created a necklace symbolizing her father’s country, Cuba, which was selected for display at the Asian Art Museum. When asked about what inspires her, Melissa said, “Wearing [my mother’s] jewelry inspires me to work hard in school and to earn the education my parents wanted for me, and didn’t have the chance to get.” Melissa hopes to apply her strengths to studying law in the future. Crista is the daughter of immigrants from El Salvador. She is inspired by her parents’ perseverance and determination to provide for her and her siblings. Crista states, “Their bravery in the past is my motivation to keep pushing until I achieve my goals.” But Crista’s goals extend far beyond herself. Crista is determined to be the first in her family to graduate from college and to use her education to help others and fight for social justice. She views education as a form of resistance. As her educational advisor shared, “I am enthusiastic that Crista will continue to overcome barriers and bring light not only to herself, but to those around her.” An 826 Valencia student since middle school, Crista feels grateful to have been immersed in writing and to have explored a variety of genres and styles from a very young age. Thinking back on her experiences with writing, Crista states, “I discovered that there was no limit to writing. Writing will undoubtedly play a role in my future.” Celeste moved to the United States from Mexico in ninth grade. At the time, she spoke little English. Now, just a few years later, she has thrived in her AP English courses, participated in numerous 826 Valencia writing workshops, and worked twenty-five hours per week to support herself throughout high school. Celeste’s passion and energy for learning continues to grow. Her advisor calls her “a positive force for our high school” and “a person who cares deeply about her peers and community and takes it upon herself to help make our society a better place.” When asked about her relationship with writing, Celeste says, “Writing has been everything for me at some points of my life; it has been a therapist, a way to speak up, to have fun, to waste time, to study, to work, to understand—writing is a part of me and who I have always been.” Whether he is writing, creating visual art, or coming up with innovative ideas to support his community, Newberth’s creative spirit leaves a lasting impact on every individual he interacts with. His teacher states, “Newberth is a remarkably brilliant young man who has an unparalleled work ethic and dedication, not only to academic achievement, but also to the quest for knowledge.” One example of this dedication comes from his time at Mission High School, when he started an after school class to support teachers in strengthening their Spanish skills. This group met weekly to interact, read, and practice together. Newberth writes, “[This group] is representative of the core values we share at Mission, where our community is interested in engaging and learning about other people’s culture with utmost respect and openness.” Of his future, Newberth writes, “I want to continue improving my writing skills, delivering justice to my community through essays, poems and vignettes. I want to become a writer, and do it freely and wholeheartedly like I have been able to do until now.” Jennifer came to the United States from Mexico three years ago to be reunited with her mother, whom she hadn’t seen in a decade. She is the first in her family to graduate high school and will be the first to attend college. A highly motivated student, thoughtful writer, and fierce advocate for her community, Jennifer is always thinking of ways to help others. As a student at San Francisco International High School, she became a leader in a group called Jovenes Promotores, organizing events for immigrant communities and engaging in peaceful demonstrations for immigrants’ rights. She also tutored other newcomer students at her school on a regular basis, dedicating her time to helping them improve their English and feel more comfortable in a new country and school community. Her teacher and advisor writes, “Jennifer’s thoughtfulness, determination, and commitment to helping other immigrant students will make her a valuable asset to any college.”