I first heard of 826 Valencia when Dave Eggers moved back to San Francisco in 2001. Kevin Feeney, a classmate of mine at St. Ignatius high school, met Dave at a book reading for A Heartbreaking Work of Staggering Genius. Kevin walked up to Dave after the reading and asked him for tips on starting his own literary journal. Kevin then launched his own literary journal called Thought Magazine when he was only 15 years old.

In the fall of 2001, Barb Bershe, the publisher of McSweeney’s, invited Kevin to paint some bookcases at a site she just leased in San Francisco’s Mission District. The goal was to set up a tutoring center on this site. Kevin invited me, and we showed up at 826 Valencia Street to find a dark, vacant warehouse. The roof was bulging down and the beams supporting the roof were sagging and cracked. We were told that squatters lived on the roof for a while and that was the cause of the pitch of the roof. The warehouse was barren, but Barb insisted that with some TLC and structural upgrades, this space could turn into a center of learning. And due to zoning, they needed to have a storefront. Somebody came up with the concept of a “Pirate Supply Store,” and the rest of it is history.

Kevin Feeney was a sophomore in high school at the time, and I was a senior, so when Nínive Calegari and Dave opened 826 Valencia for its first workshops with well-known Bay Area writers, we were the first to join the classes.

We took free writing classes from Dave Eggers, Vendela Vida, Michael Chabon, Stephen Elliott and other excellent authors and teachers. I learned a tremendous amount about writing and editing in these free workshops. From the earliest days, students would send drafts of their writing up the ladder to the editor, Mr. Blue, who would shout down his critiques or what he enjoyed about the story. He had a stamp of approval, which was an actual stamp. On a wall were Polaroids of the writing tutors and students at 826. In the pirate store, there were various seafaring supplies including a vat of lard, a viewing theater for Carl the Fish, and signs insulting a fictitious nautical warehouse across town called “Captain Rick’s Booty Cove”—the closest competitor. 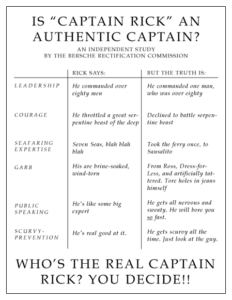 When I attended UC Berkeley, from 2004-2007, I returned to 826 Valencia, this time as a writing tutor, specializing in helping students draft college admissions essays. I also tutored kids to get their writing ready for issues of 826 Quarterly. And I worked with Balboa High School students, helping them edit oral histories for the book I Might Get Somewhere, with a foreword by Amy Tan in 2005.

Kevin Feeney went off to Harvard, where he wrote a 2005 profile of a kid who’d just dropped out of Harvard to start his own tech company. Feeney’s Harvard Crimson profile of Mark Zuckerberg and “The Facebook” became key source material for the film The Social Network. Feeney went on to start 826 Boston before graduating from Harvard in 2008.

During this time, I transitioned to McSweeney’s Publishing, working as an intern and helping on various writing and editing projects at the publishing house next door, including fact-checking for the Voice of Witness Series and The Believer magazine. This experience led me to work at Pearson Publishing, editing college-level science textbooks. I then continued on to get a Master’s in English, and then worked as a freelance journalist for publications ranging from Berkeleyside to Wired Magazine. I landed the job of technical writer at Google in 2010, where I’ve been working ever since. 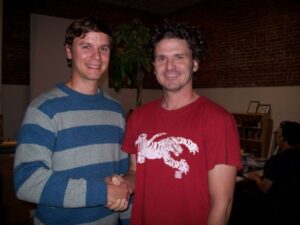 One thing that encouraged me back then was looking at the manuscript pages of experienced writers framed and hanging on the walls. These drafts were covered with the red ink of editors and showed me as a young student that the process of writing is rewriting. That you need to go through many drafts with trusted editors before you have something that’s ready for print.

Another lesson that’s stayed with me is I remember Dave Eggers advising me in an editing session to never write a line that anyone else has already written. Each of us has a unique voice and story to tell, and we should use language that hasn’t been used before to tell it.

Reflecting on the past 20 years, it’s amazing to see how much 826 has expanded, but how the original heart of this quirky nonprofit is still going strong, providing students with a safe space to create. I’m grateful for my time at 826 showing me the path to make a career out of writing. And I thank Mr. Blue for giving me his stamp of approval, and the confidence to be a writer.

Matt Werner is a former student and volunteer at 826. His most recent project is Burning Man: The Musical, a feature film about techies vs. hippies at Burning Man now available on Amazon Prime.