826 Valencia students are more than familiar with all things pirates, fish, hidden treasures, and the deep blue sea. Back in May, in collaboration with Story Xperiential, a nine-week program where students learn narrative & visual storytelling from Pixar professionals, two of our students, Julian Ortega and Isabelle Tam, created this short story reel about a fish who breaks out of his bubble, navigates loneliness, and finds friendship. Read on for more about our students’ learning journey! 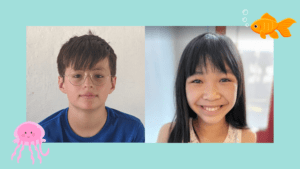 What did you learn?

Julian: “[I] was quite surprised at how a simple “What If?” question could lead me to make what I made. Everyone I worked with helped me improve and shape my ideas…and within nine weeks, [I turned them] into my reel called The Lonely Fish.

He also shared that, “each week [in the program] teaches you a new set of skills that you can work on, without [the program] being too overwhelming.”

For Isabelle, one of the best parts of the program was “interacting with other people.” Xperiential allows community viewers to provide creators with feedback and share differing perspectives, something that Isabelle appreciates because, as they mentioned, “mistakes are made but when other people catch them, you can fix them to make [a] story better.”

Isabelle: “I learned about storyboarding, what it is, and the process” by working with the “same tutor every week…and [understanding the] objective of [the] project.”

What do you hope for?

When looking ahead, Julian shares that “…in the future, Pixar Xperiential should reach out to more kids. I learned so much from the nine weeks working with Pixar, and I wish other kids to have the special experience that I did.”

As for Isabelle, they share that becoming a storyboarding artist is something they’re considering (along with a possible career as an orthodontist) and share that if they were to create another reel, it would likely be about a frog on the moon who can’t get down due to a lack of resources.

We were buoyed and moved by The Lonely Fish and agree with Megan, a community viewer, who commented “I love this film, it has such a heartfelt message, something that everybody on the planet wants: a friend” and Nalani who shared that this story “Gives everyone hope!”

We can’t wait to read, hear, and watch what you both create next, Julian and Isabelle! Thank you X in a Box, Elyse Klaidman, Pixar, 826 Valencia Programs Coordinator Kendra Lappin, and all our volunteer tutors for supporting our students during this creative process.