Young authors celebrate We All Belong: reflections about borders 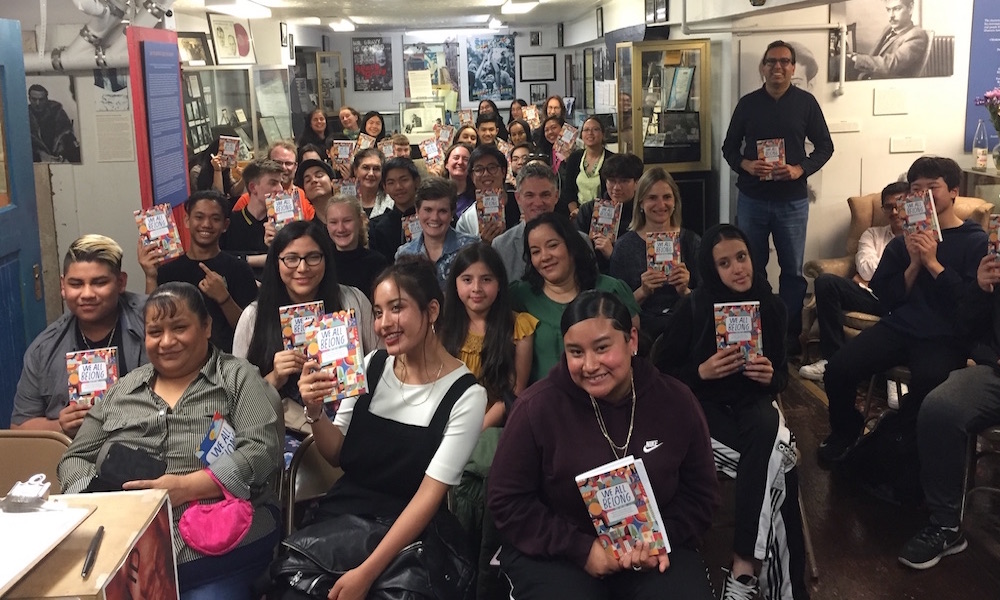 On the evening of May 23, a small crowd gathered at The Beat Museum, located in San Francisco’s North Beach neighborhood. They were there to celebrate 826 Valencia’s Young Authors’ Book Project, We All Belong: reflections about borders from the students of Galileo High School. Two sophomore classes, with a total of 51 students, were published in this beautiful anthology.

The writing for this book took place over the course of five weeks in the beginning of the spring semester. A group of consistent tutors from 826 were there to help the students with everything from brainstorming, to writing, to editing.

The release party was the first time these young authors saw their book. One student told his friend, “The good thing about this is seeing my name,” and his friend replied, “You have a book!” This excitement and pride filled the space during the whole event. Students, teachers, families, tutors, and staff were very happy to celebrate the group of published authors.

The night started off with Jerry Cimino, a founder of the Beat Museum, who introduced Ryan Young, In-School Programs Manager. Before introducing the student readers, Ryan talked about the project itself. The project was inspired by Always Running, the book that students were reading as they wrote their own pieces. The author, Luis J. Rodriguez, writes about the borders he faced in his life growing up in Los Angeles. The prompt for the students was: what does a border mean to you? This could mean physical borders, international barriers, personal borders, or anything else that came to the students’ minds.

As a part of this project, Luis J. Rodriguez came to San Francisco and talked to the students face to face about his book. The students had prepared questions for him, and for an entire class period they were able to have a conversation with him. He got to further explain some aspects of the book and what happened with his life after the book too. Rodriguez then wrote the foreword for We All Belong.

That night at the Beat Museum, handful of students bravely went up to read their pieces to the crowd. The first reader of the night, Elizabeth, read her poem, Dandelion, about what it means to stand out and be different and yet still be “in the same soil” as everyone else. Next, Maybellin read her piece, La Vida de Una Mujer, about her family and about sexism, specifically about the strength she has seen from her mother. The third reader, Gennesis, read her piece, Vuela, which was a combination of poems and family stories, telling the story of her parents’ immigration and how they met here and have overcome so much. Lastly, Kevin G., read his piece Retrospect, which reflected on racial profiling and discrimination and how it can affect people’s lives.

These pieces are only a tiny sample of what the students wrote about for this project. These pieces deal with tough subjects, and all are beautifully written. The audience could feel the emotions, as tears, laughter, and “awwws” filled the space.

Next up was a student panel. Questions ranged from wondering what inspired their pieces, to what was the best part about working with the tutors. Our two wonderful partner teachers, Ms. Stangland and Ms. Morrison, also got a chance to speak. Ms. Morrison noted, “I’ve been to the Beat Museum before, and I’ve never seen this room as packed as I’ve seen it tonight … and I think that’s a testament to the students of Galileo High School.” Both teachers were proud of their students and very grateful that they got a chance to participate in this project with us. They were also surprised with our Teacher of the Month Award for all of the hard work they put into the project. As Ryan put it, they were “dream collaborators to work with.”

The night ended with lots of gratitude that we also want to extend here—thank you to the Beat Museum for allowing us to use their space, to Ms. Stangland and Ms. Morrison, the students, Luis J. Rodriguez, the tutors, editorial board, 826 staff members, our copyeditor Beret Olsen, illustrator Lisa Congdon, and our in-house design team—without you all this project would not have been possible. Finally, thank you to the student authors, who never gave up on this tough project. It takes courage to share your voice with the world.